Shoalhaven Hospital caters for all women who live in the Shoalhaven area and also visitors to the area.

Note: if you are visiting the Shoalhaven area we recommend you bring any pregnancy information in with you, including your antenatal record of care, which is most often a "yellow card".

Starting labour or have concerns?

Women who think they are starting labour or have concerns please:

Our Birthing Unit and Maternity Ward (Postnatal/Antenatal) are located in the same place. They are on the same floor as the Hospital’s main entrance. After you enter the Hospital, turn right after entering the glass doors, follow signs to Maternity.

Note: Please ensure you follow COVID-19 screening procedures at the entrance to the hospital before coming to Maternity.

At Maternity there is a door-bell to press to alert staff of your arrival.

The Neonatal Unit is located next door, just a few metres away from the Birthing Unit.

This video shows you how to find your way.

At Shoalhaven Hospital we have four Birthing rooms, each with a large bath. The Maternity Ward has 13 beds, some of these are single rooms, others are shared two-bed rooms.

Who can come to the birth with me?

You may bring a birth partner with you to hospital.

Due to COVID restrictions, that are often updated, please clarify the number of support people before you arrive by calling Maternity Ward ph. 4423 9240.

If you are not in labour and need to stay overnight, we will ask your support person to go home overnight so everyone can get some rest, then they can return at 8am.

If you go into labour overnight your support person can be called to come back into the Birthing Unit.

What do I bring

From the 'Having a Baby' booklet (NSW Health)

• nightdresses or large t-shirts and a dressing gown
• some loose, comfortable day clothes
• comfortable footwear
• several pairs of comfortable underpants
• maternity bras and/or maternity singlets
• breast pads
• toiletries
• sanitary pads – either ‘super’ size or maternity size (you can buy maternity pads in supermarkets)
• something to wear while you’re in labour if you choose to wear clothes – a big T-shirt or an old nightdress, warm socks
• clothes for you to wear when you’re going home (you won’t be back to your normal shape yet and may still be in maternity clothes)
• anything you want with you in labour (e.g. music, massage oil, snack food).

• nappies and clothes for the baby to wear home
• cleaning products for baby, nappy wipes or cotton wool for baby’s nappy changes and soap or non-detergent wash for baby’s bath
• if you have a long distance to travel, you should also pack a change of clothes for the baby
• baby blanket
• baby capsule in your car.

Your partner or birth support person may also need to have a bag ready.

• food and drinks for them during labour, as well as for you. This may include juices or other drinks,
soup, and foods that are easy to heat or ready to eat so they don’t have to leave you for long
• swimmers and towel (if you’re going to a hospital with a large bath, and you want support in the
water while you’re in labour)
• camera.

Am I in Labour?

Every labour and birth is different and varies depending when it starts and how long it takes.

Your midwife or doctor can answer any questions you might have about your labour and birth and what you and your partner can do to prepare.

There are three main stages of labour. The time taken for each stage will vary from woman to woman.
Everyone is different.

Stage 1 - when your cervix is opening

Stage 2 - when baby is being born

Stage 3 - when placenta is delivered

Have a look at p71 in this book for more information

How will you know if you’re going into labour?
Most women experience one or more of these signs when labour is beginning:
• regular contractions/ period-like cramps
• a ‘show’
• waters breaking

For more information, have a look at the "Having a baby book" given to you at the hospital or click here for an on-line version.

What is active birthing?

In an active birth you have the freedom  to move during labour, and to give birth naturally  in a position of your choice, according to a woman's natural birth giving instincts. This instinct is strengthened during pregnancy as a woman learns to trust in her body's natural ability to give birth.

Reduce the risk of medical interventions: Being in upright positions during the second stage of labour has been  associated with a significant decrease in the use of interventions. It helps to  open the pelvis  up when the woman is in a squatting or hands and knee position, allowing more room for the baby to travel through.

By being active and upright in the first stage of labour women could shorten their length of labour by approximately one hour.

It makes a more satisfying  labour:

Being in an upright position women felt more satisfied with their birth experience overall and in control of their birth process for comfort positions.

It makes the most of gravity:

It makes sense to utilise gravity during labour. Pushing in an upright position allows gravity to do its job and help the baby travel down through the birth canal.

Your partner will feel more involved in the birth process:

During an active labour, a birth partner feels like he or she is actively participating in supporting the mother-to-be. It also creates a rewarding and bonding experience for all.

Has the potential to result in less trauma to the baby:

Because an active birth can result in fewer interventions, less likelihood of stress to the baby or a longer than necessary labour. Of course, there are no guarantees, but active birth certainly helps to keep birth normal for both mother and baby.

Setting the scene for an Active Birth, please see the below picture to view some recommended labour birth positions.

What is the Perineum and how to protect it

Why is it important to minimize or avoid causing perineal tears?

From this information leaflet, around 85% of women will have some perineal tearing during vaginal birth. This can cause pain and discomfort after birth.

For some women , sexual intercourse can become uncomfortable or painful for a short while. If this persists beyond 12 weeks it is important to see your doctor.

How can I avoid the damage?

Perineal massage can help reduce perineal tearing. Please speak to your midwife or doctor about this document on Antenatal Perineal Massage.

Understanding the choices of pain relief are an important part of getting ready for the birth of your baby.

Although having a baby is a natural process, every woman is different, and every birth experience is unique, so the need for pain relief varies.

There are different ways to manage pain during labour.

Available pain relief options in our Birthing Unit include:

Please click here for more in depth information on pain relief in the "Having a Baby" book.

If you have an Induction of Labour, your doctor or midwife will discuss all of the details with you as you will be asked to sign a consent.

An induction can be done in a couple of different ways. Your doctor or midwife will give you more information when they book a date for you (if required) and you will be provided with the information pamphlet below.

What is an Induction?

An induction of labour may be booked between 37 and 42 weeks of pregnancy.

Induction of labour usually involves medicine (oxytocin) combined with the breaking of waters in front of the baby’s head.

The lower part of your womb (cervix) is assessed to see whether it is ready for birth. Your doctor or midwife will talk to you more about this if you are having an induction of labour. You will receive an information leaflet and asked for your consent.

Before and after we give you medicine for an induction of labour, we will check your baby’s heart beat with a device which records baby’s heart rate on paper (cardiotocograph: CTG) to make sure your baby is well.

You will be watched for:

What things should make me alert a midwife or staff member whilst in hospital?

Prostin gel and Balloon catheters (tubes) have been used for cervical ripening consistently within maternity services and are considered safe for you and your baby. If you have any concerns regarding this treatment please discuss this with the doctor or the midwife.

I'm having an elective Caesarean

Your doctor or midwife will talk to you about any risks and care during and after your caesarean.

When your caesarean is booked

The day before your caesarean

On the day of your operation

Arriving on the Maternity Ward

After your baby is born

The midwife that accompanies you to theatre will assist with taking photos, feeding and encouraging skin to skin contact. Your baby will be weighed and measured. Staff will ask for your consent for Vitamin K and the Hepatitis B vaccines for your baby.

Looking after your wound

Reducing the risk of wound infection

After the dressing is removed, it is important to look at your wound regularly for signs of infection.

This includes signs of redness, swelling, discharge or ooze, increased pain or you have general feelings of being unwell.

New parents have found doing these before your baby arrives can make a big difference:

Speak to the midwife looking after you if you plan to go home from the Birthing Unit. You will be required to stay at least 4 hours after birth.

With your consent, at birth, your baby will receive their Hepatitis B vaccination and Vitamin K injections.

Click here for more information about Hepatitis B vaccine

Click here for more information about the Vitamin K injection

Our friendly midwives and doctors help new parents with getting to know their new baby while in hospital and also put families in touch with further support for when they go home.

If you are worried about your care in hospital, REACH out for help. 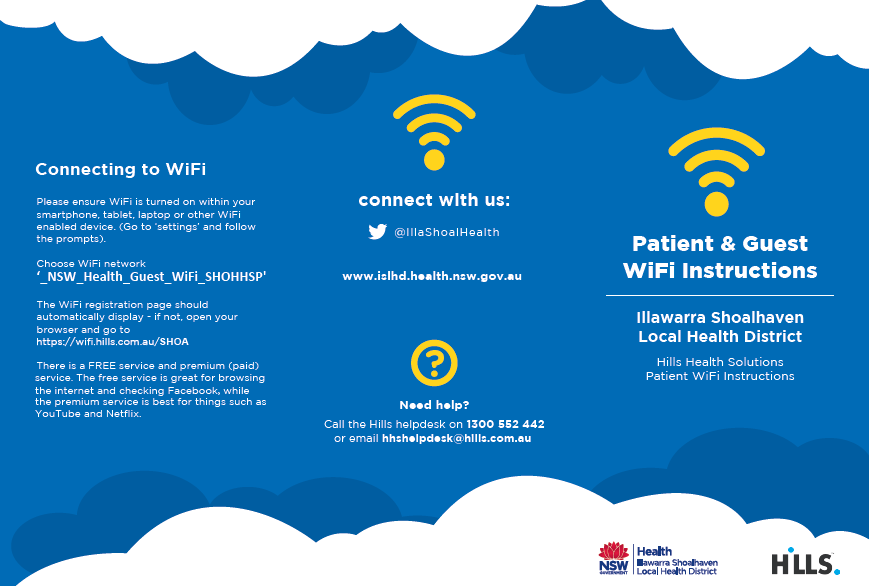 Need an Interpreter? Professional interpreters are available if you need help to communicate with staff. Our staff can also ask for an interpreter. The service is free and confidential. We will book the interpreter for you. You can also call the Translating and Interpreting Service on 131 450 if you need to speak to us before your appointment. Click here for more information about the Illawarra Health Care Interpreter Service.